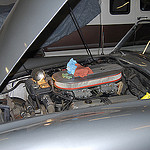 Childwall Fiveways Garage will undertake timing belt replacements in Garston. Not all newer cars have timing belts but for those that do and older models of most manufacturers, the timing belt should be checked around 60,000 miles and probably should be replaced. Just because the timing belt has not snapped yet doesn’t mean it won’t soon. There is no warning. One minute you are driving down the highway and the next you come to an abrupt stop. The belt just snapped. A timing belt is easy to replace, and the part is not expensive. However, the replacement is labour intensive because several engine parts need to come off before the new belt goes on.

Childwall Fiveways Garage is an independent garage with highly trained and experienced mechanics. When you come to us in Garston, timing belt replacements will cost up to 60% less than you will pay at the dealer. We use the same parts and our mechanics have the same skill level. We will even collect your car and deliver it back to you. At Childwall Fiveways Garage you don’t sacrifice customer service for your low price. Depending on your engine configuration other engine parts could become damaged when the belt snaps. The timing belt keeps the upper and lower parts of your engine working in sync. Once that belt snaps valves and pistons can collide. That doesn’t happen often but if it does, at least with us your repairs will be guaranteed and your cost lower than the dealer.

Some car manufacturers say timing belt replacements in Garston will never be necessary. They have manufactured them to last as long as you own your car. Well, we own our cars a lot longer than we used to. 60,000 used to be high mileage for a car. Not anymore. It is not uncommon for us to see cars in for service and repair with 200,000 miles on them. Call us at Childwall Fiveways Garage. We will check and/or replace your timing belt instead of telling you it’s time to trade your car in as a dealer mechanic might. We fix cars; we don’t sell them. We figure you will buy a new one when you’re ready.

We offer a full range of services on all makes & models, including:

We offer a full range of services on all makes & models, including:

As a family business that has been trading in Liverpool for over 30 years, we wanted to reassure our customers, suppliers and friends of the business that we have a clear and well-defined plan in response to the coronavirus (COVID-19).

In line with recent government guidance, we are still open for servicing, MOT,s, and repairs so please call to book an appointment.

All cars are given an interior 20-minute Anti Virus Deep Cleanse Spray.

In addition to adhering to social distancing rules, we have purchased an anti-virus and deep bacteria machine that we will use to clean the inside of your car. Plus we also offer a Free Collect & Drop Off Service.